An important road link for the region, Summerland Way connects the Bruxner, Gwydir and Pacific Highways and reaches from South Grafton through to the Queensland border near Woodenbong.

MPs Chris Gulaptis and Thomas George have called for community feedback on the Draft Strategy which is available through the NSW Government’s Roads and Maritime website.

“It is an important freight link for the timber, agriculture and manufacturing industries in Kyogle and Casino, the Darling Downs and the south east regions of Queensland via the Mount Lindesay Highway,” said Mr Gulaptis.

The corridor has the potential to provide a vital link between producers in the Northern Rivers and South East Queensland.

With a growing population of 3.3 million less than 2.5 hours drive away, and a major Greenfield development in Bromelton west of the Mount Lindesay Highway near Beaudesert, Summerland Way presents an ideal alternative route to growing industrial zones west of the Pacific Highway.

The Bromelton State Development Area (SDA) will also be connected via rail link from Casino and Kyogle, which in turn links to the Port of Brisbane. Summerland Way provides a key link in the supply chain to bring freight into the rail corridor for transportation.

The proximity of the Northern Rivers to Queensland provides great opportunity for growth in our region.Currently  30% of the Tweed Shire’s working population are employed in Queensland. The development of the Summerland Way corridor broadens opportunity by linking to our inland regions, including Lismore, Richmond Valley and Kyogle LGA’s.

Considering the proximity to South East Queensland and the Queensland Government’s strategic focus on the region, it is critical the Northern Rivers economy takes advantage of this opportunity. 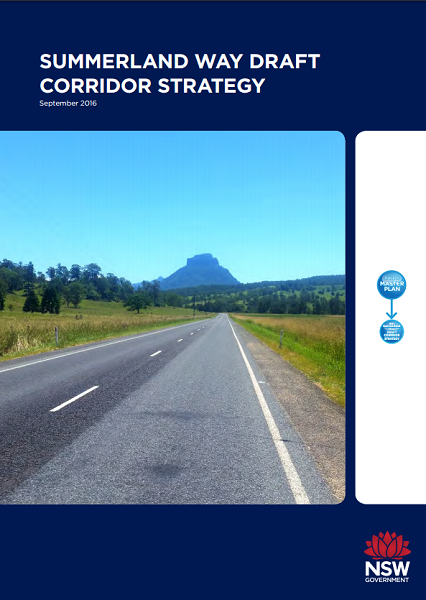