Screenworks, in partnership with Every Cloud Productions has announced the Screenworks Attachment Program to support young people living in the Northern Rivers to gain work experience in the screen industry.

An innovative drama series, DEADLOCK will begin filming in the Northern Rivers in July 2017. Screenworks has been involved with the development of this series since 2015 when it partnered with Every Cloud Productions to host the Deadlock Script Lab Workshop in Byron Bay with young emerging writers from across Australia.

With DEADLOCK now moving into production, Screenworks has devised a program to offer young aspiring filmmakers the opportunity to learn from professional crew working on this production in our region (also known as an “attachment”).

To provide these attachment opportunities to at least nine young locals, Screenworks needs to raise $45,000. They are seeking support through a GiveNow fundraising campaign to fund the following attachment projects:

Donations of $2 and above to this program are tax deductible.

To find out more about this project and to donate visit the Screenworks website. 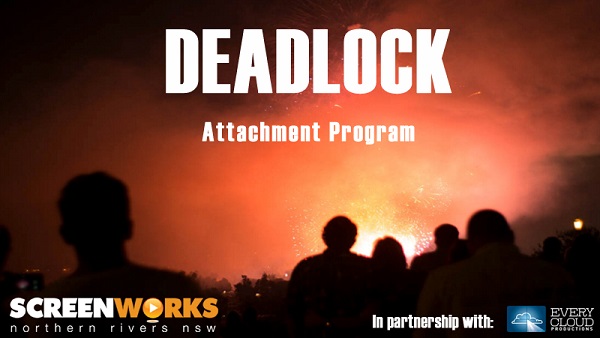