As the world transitions to a digital economy, the Northern Rivers is well placed for growth in digital industries. Improving regional internet speeds are breaking down geographical barriers to regional work and lifestyle choices. Digital professionals now need only a fast internet connection to gain market share. This allows for lifestyle options that include beach, forest and rural living, which have long served as an attraction for film and media professionals.

It is a key priority for the Northern Rivers region to take advantage of opportunities that have arisen from the rapid growth in new technology across industries. Many traditional industries that have underpinned the local economy, including agri-business, manufacturing and the service sector, are undergoing significant technological transformation. The interpretation of these changes into a regional context and the distribution of knowledge, practices and technologies are critical to ensure the local industries remain competitive, nationally as well as globally. Increasing the value-adding to these industries is a high priority. 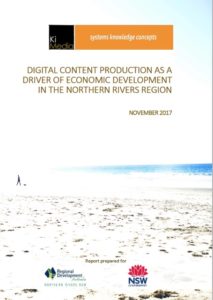 Cumulus Visual Effects was established in 2010, from the humble beginnings of their founder, William Gammon’s garage. With a laptop and a vision to create remote visual effects as a service, Will tapped into the independent film market, offering cost effective solutions to low budget films. After a few years of proving the workflow, Cumulus VFX began to spread its wings and take on larger packages of work and move into the wider area of post production and beyond. The expansion is now providing employment for twenty digital content professionals, all working at Cumulus HQ in Habitat, Byron Bay. Some of their recent projects include National Geographic’s MARS, the Australian SciFi film SFv1, Air New Zealand’s ‘Fantastical Journey’ famous safety video, the Australian sci-fi feature Occupation and international block buster Peter Rabbit.

New ‘gig-economy’ industry development is now being considered as a real opportunity. The region has already developed a national and international reputation in a variety of digital economy driven sectors. This reputation is behind a drive to seek investment into this industry to establish a regional hub for film, television and digital content production. Potentially there could be a number of digital precincts in the region, providing fast broadband access and opportunities for collaboration.

You can download the Northern Rivers Digital Economy Strategy here: