The Regional Industry and Economic Plan (RIEP) has been a collaborative effort by regional development agencies, NSW Departments of Industry & Investment and Planning, and local councils. Initial work was auspiced by the Northern Rivers Regional Development Board between 2003-2009, and this has now been handed over to RDA — Northern Rivers to integrate into the Regional Plan.

An Update of the RIEP was carried out in 2009 and released in March 2010. This report tracks trends in the region’s economy since 2003, and provides an overview of what has happened since the RIEP was finalised in 2005. It includes some targeted industry consultations. The [wpfilebase tag=fileurl id=1457 linktext=’Working Paper for the Regional Industry and Economic Plan‘ /] (November 2003) is made available here, as it contains data on ‘End Product’ Producers which was not included in the 2009 update. 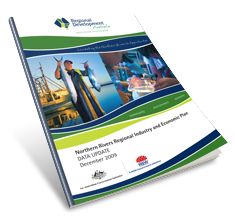 In May 2012 an addendum to the RIEP was added, with regard to RDA-NR’s position on coal seam gas, in light of the new data and community concern that has arisen since publication. It says:

“RDA–NR recognises that there is significant community concern in the Northern Rivers concerning the practice and impacts of coal seam gas (CSG) mining and acknowledges that new scientific data is providing greater information about its potential impacts.

In line with the principles set out in the Northern Rivers Regional Plan 2011: vision to 2020 – we have replaced the statement in dot point 3 under ENERGY on p 36 of the Regional Industry and Economic Plan (2005) with:

RDA-NR supports the communities’ call for a moratorium on all coal seam gas mining in NSW until further, more conclusive, evidence about its potential impacts on the environment and communities has been established. Until such time, RDA-NR encourages the application of the precautionary principle, signalling concern for the environment and a wish to ensure there are true benefits for our communities, as well as for industry and its shareholders. RDA–NR encourages Governments to develop the most appropriate regulatory framework that balances community concerns with industry needs.”

The Clarence, Richmond and Tweed River Valleys individually and collectively are undergoing substantial social and economic change due to the effects of population shifts, global competition and industry restructuring.

State, Federal and Local Government stakeholders , together with the region’s businesses and local residents have recognised the benefit of taking positive action in relation to economic development and employment growth, rather than sitting back and being reactive. This will ensure that the Northern Rivers is well placed to grow and develop in accordance with its own vision and values.

In November 2003, a Working Paper for the Northern Rivers RIEP consolidated information from over 40 previous studies, plans and strategies and introduced new information and analysis on the regional economy. It documented economic development issues and challenges facing the region and identifies strategic directions and actions for government, industry and communities to advance regional prosperity. The Working Paper is the first comprehensive profile of the region’s economy with an analysis of the value chains for 11 key industry sectors.

Consultation concerning industry data, vision elements, economic development objectives and recommendations has been occurring throughout February to October 2005 and resulted in The RIEP Community Road Map ito Developing our Future in 2005. Industry roundtables were convened in 2006 to identify implementation priorities, key champions and review progress on implementation since finalisation of the Plan.  The results of this process can be found in the RIEP 2006 Progress Report.

Other reports and work prepared as part of the RIEP include: 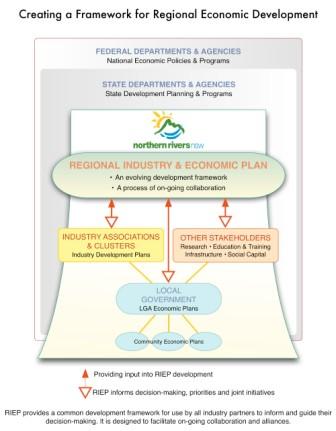 The goal for the region is to achieve economic development and employment growth in a sustainable way for our region’s population.

Sustainable economic development can be defined as an activity that improves the prosperity of our region, or at least maintains it, without prejudicing the capacity for future generations to enjoy the environment.

The economic development objectives identified in 2005 in the RIEP are to: